Our 38A came with a three burner propane stove. Just the cook top, no oven. That role is fulfilled by the microwave/convection oven. We use the cook top, but I don’t think I used two burners more than ONCE, and I don’t ever recall using three.  99% of the time I use one. The odds of me cooking a Turkey dinner for 8 are slim, to none.

But, the stove takes up a lot of real estate. Work space that is in short supply. With the coffee maker up there, the double sink and the cook top there is very little room left. The top drawer pulls out with what Forest River calls a cutting board, (Want to see a real mess?) but that blocks access to the drawers under it. Normally I prep on a wooden cutting board on top of the covers over the stove, and when that’s done I put the cutting board aside and open up the stove etc etc. Too many steps, too much clutter. So out it comes. Nicely packed in a box in case I, or the next owner if ever, want to put it back.

Friends removed the cook top and replaced it with a built in two burner induction cook top. That’s an idea. But, still two burners and right “there” where you want to work. So, I decided to go with a single countertop plug in induction cook top. It stores in the cabinet above the micro/convection oven and takes up minimal space when I use it.

In the space vacated by the cook top I built a nice fixed cutting board with a utensil storage under it. Put a fiddle on the front so you don’t make a mess, and you can store things on it when driving so they can’t get loose. The Corian covers still fit over it, but I have a feeling they will be permanently moving to the cabinet under the sink.

Here’s how it went down:

1: After closing the valve on the propane tank, burn off the gas in the line by lighting a burner.

2: Remove the burners. They twist/pull out, then carefully remove the ignition wire. Guide the wires through their holes below the top. 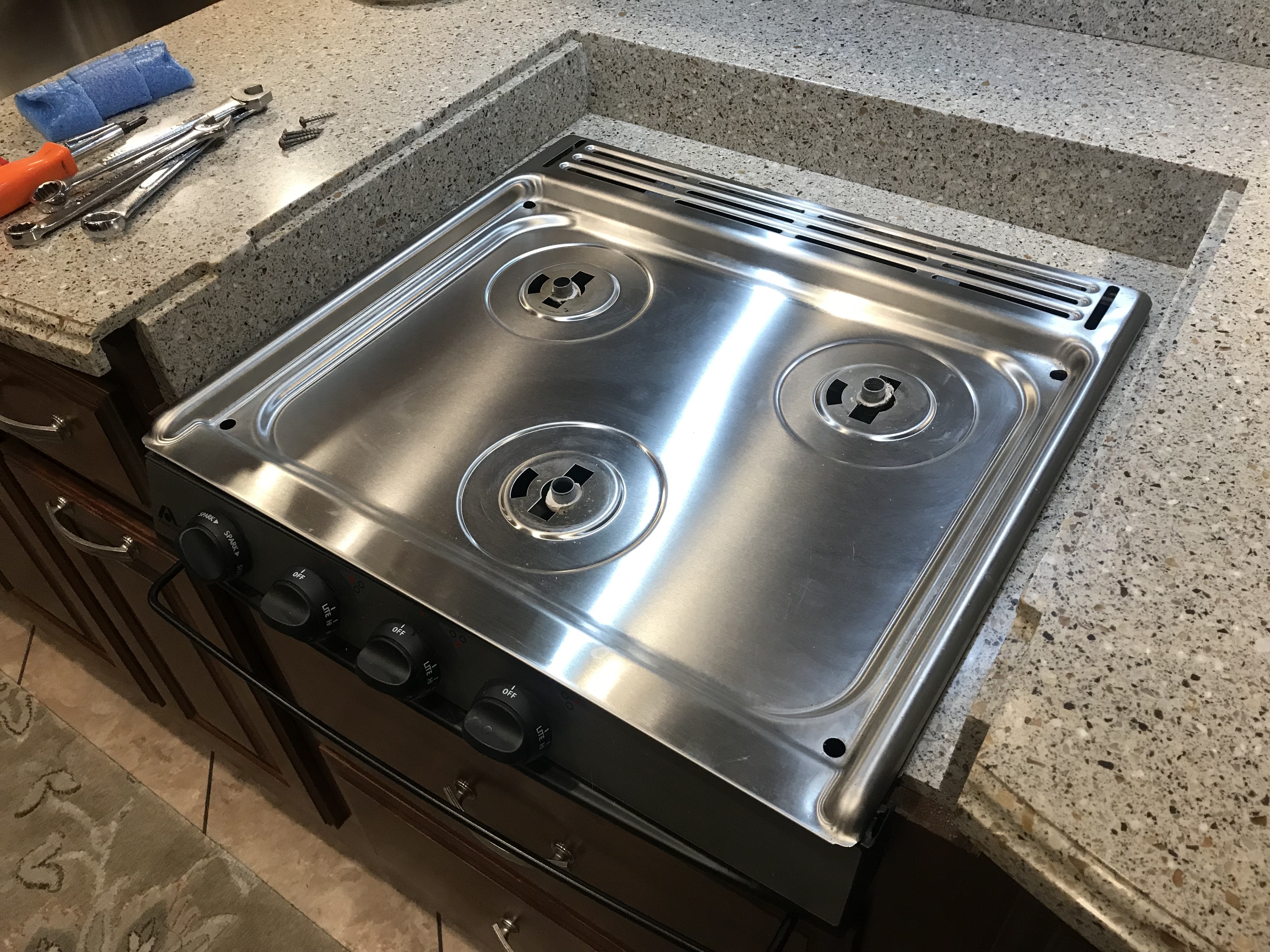 3: Push the top backwards to release the retainer clips in the front. Hinge up slightly and then pull forward and out. 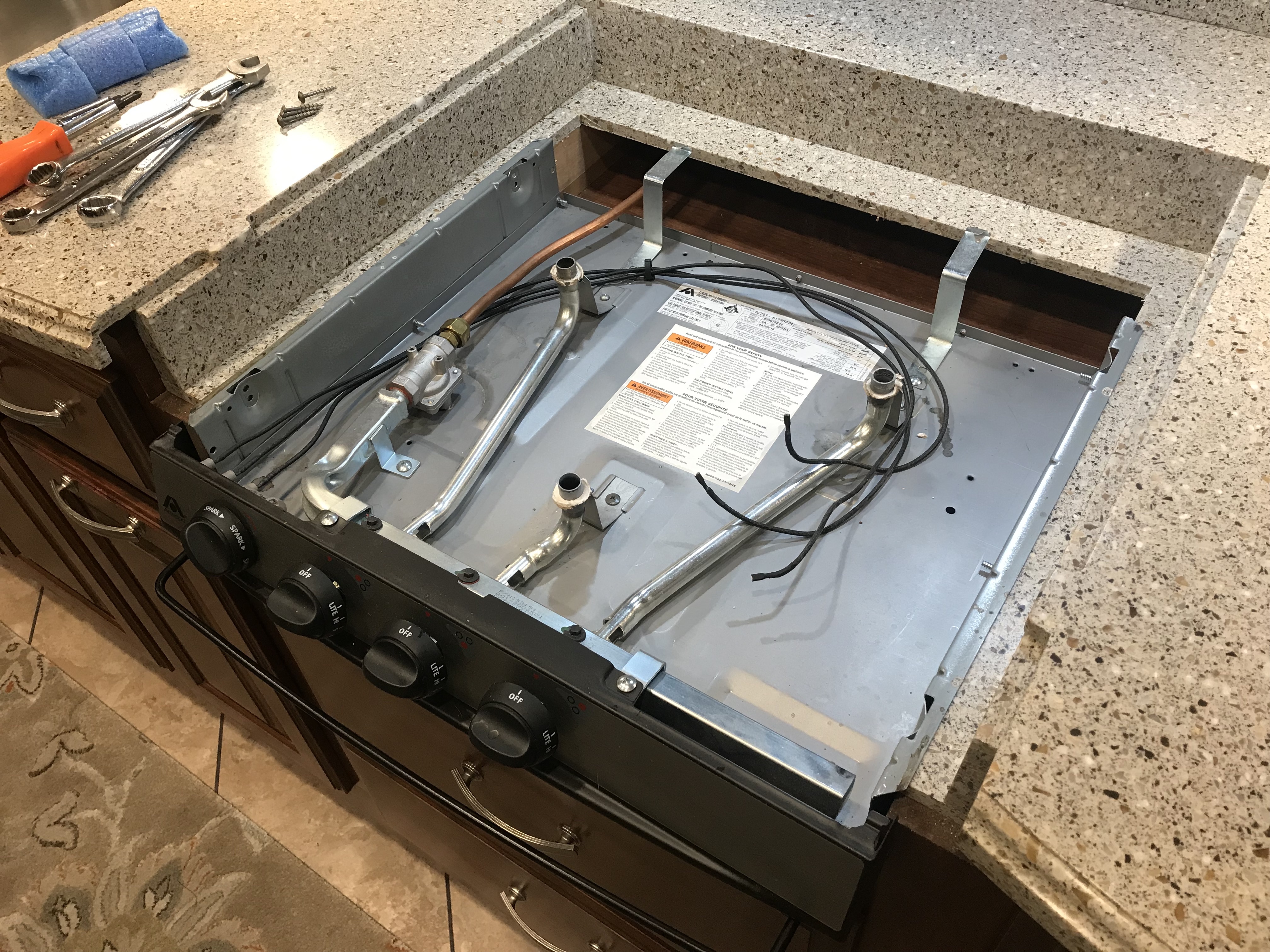 5: Take the piece to the hardware store and buy a cap. This is PIPE THREAD, 3/8″ IIRC don’t hold me to that. Reconnect the piece to the gas line, add some tape to the pipe thread side and put the cap on. Turn the gas valve back on, and check for leaks. (Soapy water).

6: If no leaks are found, gently bend the supply line back under the counter. Voila, a nice clean starting point to work with.

I used red oak, it’s relatively cheap and available at Home Depot/Lowes. Made a back and a front for the cooking utensil compartment.

Red mahogany stain (oil based) brush and wipe…. close enough. When it’s all done I’ll wipe it down with a dark butcher wax.

Proceeded to make a nice cutting board…… There’s a wood lip on the bottom just inside the edge, so it won’t slide out when making a left turn. You have to lift a little and then it will slide out. Trim piece on the front is not a perfect match, but it’s close. Fiddles around the edges and you can cut and chop without spilling. Use a flat dough spatula for cleanup. The wood is treated with boiled linseed oil which is food safe, and protects very well for years. I use it a lot.

Pull it out and there’s all the tools. I put a one piece layer of anti skid in there. Found it 20 inches wide and heavy duty. Sold as “tool box” anti skid instead of “cabinet/kitchen drawer” anti skid.

And, the covers still fit. Also, it’s a perfect place to put things while driving. 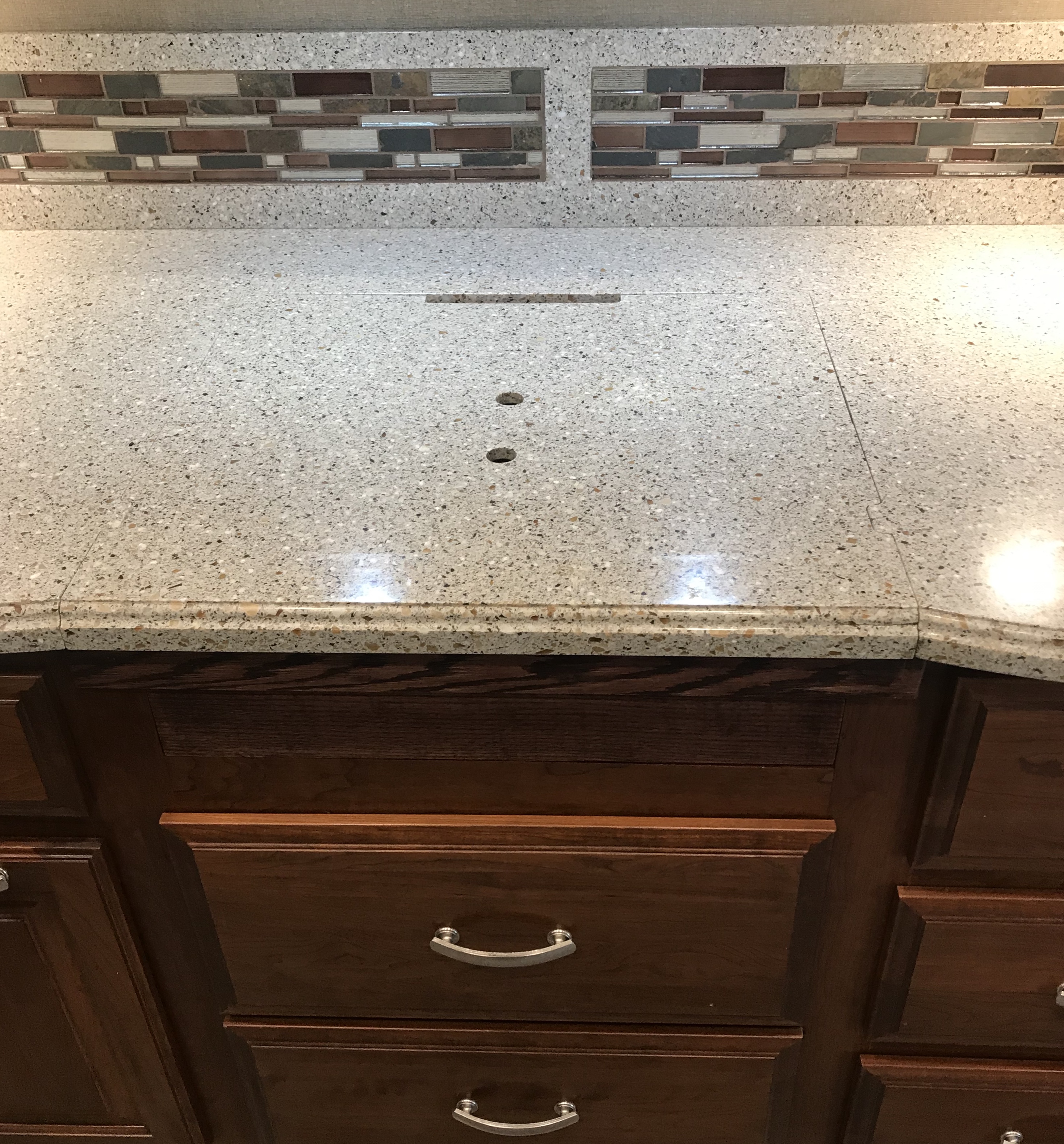 Update a year or so later….. Still like it. Also got an Instapot. Between that and the single burner induction top I can get my culinary creativity on no problem. Also found this nice decorative piece…… Yes, the matching is off, but the lighting in this picture really makes it stand out. Normally I don’t notice it. Gonna have to put a less incriminating picture here.