Used to be cars had lots of “grease points”. Nowadays most have none. Change oil is almost it for the first 100K miles on many cars out there. Not on our coaches. There’s still some hardware from the steam age under there like king pins for instance. And all these pieces are metal on metal. So to provide smooth operation and protection against damage and corrosion there’s grease in there. It’s originally pumped in and during later maintenance replaced through grease points, or more correctly a ZERK fitting.

There’s a little spring loaded shutoff ball inside which keeps moving freely if used regularly. Dirt and lack of use will booger it up and then you have to replace the fitting. Not sure what ours are, but most in the US are 1/4″ UFC. Remove, take to auto parts store and replace. They are cheap.

On this fitting fits the standard connector at the end of a grease “gun”. There’s many of these. The main distinction is manual versus electric/pneumatic. With a few exceptions the fittings on our coaches allow power guns. For the few that are manual only I have a gun with a flex hose and a one handed trigger operation. Similar to this one: 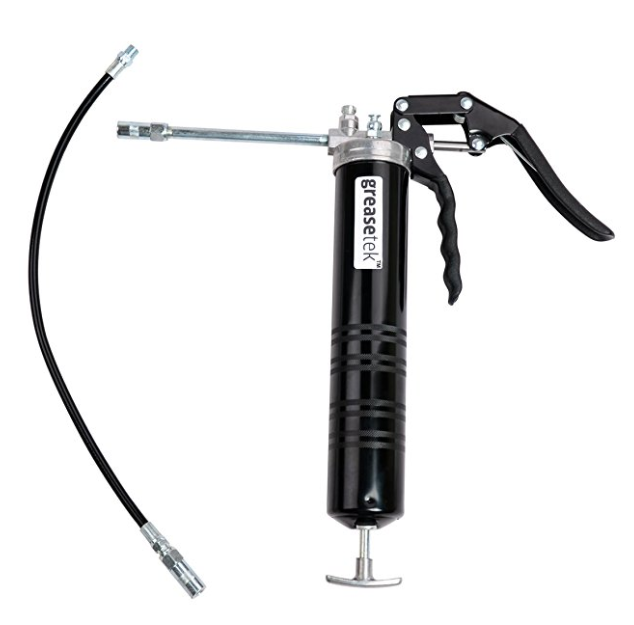 For all the others and there’s a lot of them, read on, I treated myself to a quality pneumatic gun. I have air in my shop, but you could run this off the coach air system if you wanted to. Not expensive, get a GOOD one. This is a Lincoln model 1162

Last but not least…. what do you put in there. Like oil we can wax philosophically about grease for hours. The book says that for most items a “multipurpose chassis grease”, NLGI grade 1 is OK. For some it specifies NLGI grade 2. I loaded it up with grade 2 and used it everywhere. Available at your local autoparts store, nothing special.

So….. now you have to chew your way through the maintenance manual and find all the places where you have to lube…. And, then you find that they used a different steering box and the zerk is not in the same spot. So, in the end you are on your back under there on a scavenge hunt finding them. And sometimes you discover a new one…..

But first…. being under there. Some people are a lot more paranoid than I am about being under there. I have never heard of an air bag/line failing on a new(ish) bus sitting still. I’ve also never heard of a leveler catastrophically blowing out sending the coffee off the dinette table. (I have heard of slow leaks, mostly internal, and slow bleed down). I certainly have never heard of BOTH these systems catastrophically failing at the same time. So, I make a little ramp 3 pieces a few feet long 2×12″ tall (staggered) and I drive up there. I leave the air up, and I lower the legs manually until they start carrying weight. That’s it. I feel it’s safe  and that no stands are required. Some will freak and tell me I’m suicidal. Freak on. Lastly, I have the lowest profile creeper I could find….

And off we go under the beast. Locate the zerks and clean them off. Clean the area where grease will squirt out. In some places, mostly without “boots” it tells you to pump until you see new clean grease. Wipe the excess off and good to go. (I bring a box with paper shop towels with me under there. Household rolls work too.) When there’s rubber boots you don’t want to blow them up to the point where they start spilling a lot of grease. I gently fill them until I see a little bit of grease coming out somewhere, then I stop.

So what did I find?

Count so far: 12 in the front. Note that there is nothing on the brakes in the front. Just like our cars the front is a disc brake with a caliper. Only difference is that instead of hydraulically actuated it is air actuated. There is mention in the book of some caliper grease on the pin that the calipers slide on. (Same as our cars) I consider this brake maintenance and a different chapter. I will say that on cars the pads are replaced more often and thus the pins greased more often. I will, at some point, probably go in there to take a look at this.

A note on the Spline joint. There is a plastic seal on the spline end which prohibits the grease from coming out that end. So, loosen it up. If it’s tight a rubber strap wrench does the trick, tighten hand tight.

So a total of 7 in the rear, unless I missed something. There’s more to lube inside the brakes. At some point I’ll have to go in there.

Lastly, the brake pedal/plunger gets a few drops of light oil. Says to pull the pin and remove the pedal so you can get the plunger out. Easy. Except some yoyo at FR put the pin in in such a way that AFTER he mounted the gas pedal next to it you can’t get the pin out. So, stripped down gas pedal to the point that I COULD get brake pedal pin out and then put it back the correct way…..

That’s it on Lube…. Will update as I discover things.