In order to improve comfort and functionality in the cockpit I have installed or modified a number of items. Changes so far include:

Here is what the cockpit looks like right now: (needs updating, things have changed) 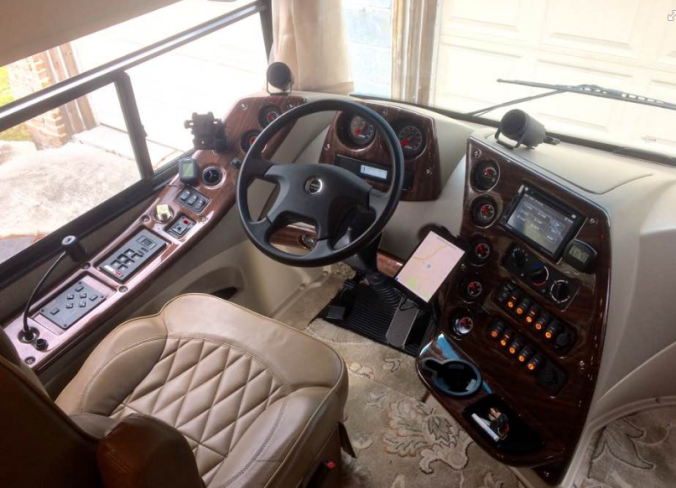 On the far left is a map light in the 12V outlet which lights up the levelers, transmission and mirror controls. Going up the next thing is the TPMS, above that the mount for my iPhone.  Power for these two comes from the outlet on the far left, out of sight. Then there’s the mini speakers (see AV description). On the center console the indoor outdoor thermometer. Battery powered, and I painted it black. The sender is wrapped in a wire basket made from a coat hanger tied up in the propane locker. These sell everywhere for $15 or so. The iPad is in a mount, with power coming from under the dash. It’s a “dumb” iPad which connects to the ATT 4G WIFI on board, and a bluetooth GPS (visible just behind the right mini speaker.) Just to the left of the bottom row of switches barely visible is the “Side camera auto/manual switch” See below. Also barely visible is the foot switch for the engine brake, next to the brake pedal. (Also see below). Not in the picture is the later installed ignition override bypass switch by your left knee.

But first, the map lights. As described in Interior/Decor the map lights were large and bright and unsuitable as map lights. I replaced them with red map lights. Again I didn’t want to increase the size of the holes so I made spacers. The lights focus quite nicely. When I’m driving my sweetie can have hers on and it is totally not distracting. I found them on Amazon….. not cheap but the eyeball is moveable and there is actually a lens in there somewhat focusing the beam….They are listed as ” Overhead dome light eyeball LED fixture for RV, Boat, Car, Auto or Truck – Italian Made, 12 or 24 Volt (LED bulb) Prima brand (Red LED) ” 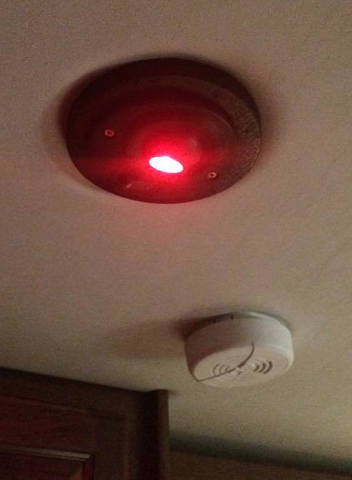 When you use the directional signal, the corresponding side camera comes on. Sometimes this is handy, sometimes it is not. It takes over the screen on the NAV/AV unit. In a fast changing nav situation (like intersecting interstates) losing the nav screen for several seconds with every lane change is a pain. At night the cameras are useless and all you get is glare from headlights from the cars behind you. The back and forth flashing screen is distracting in a dark cockpit. A mod was in order.

In the back of the NAV/AV unit manual are the connection diagrams. I found the one with the cameras:

So I followed the cable from the plug, and it disappeared into a pretty thick bundle of wiring. If you look at the right top end of “the hole” you can find the three RCA camera connectors and work it from the other end. There is still some tape to undo but eventually I got to the big black blob (it looks just like in the picture) where the three trigger wires came out. I cut the white and grey ones, and ran two, two stranded wires to this switch: 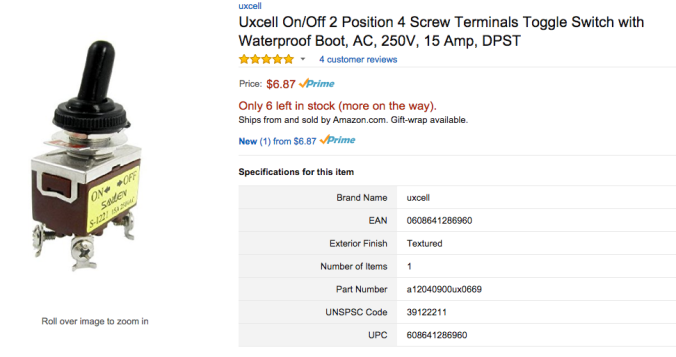 It’s a double pole single throw, which means it switches two wires, off or on. I mounted the switch in the panel:

I bought a simple momentary switch:

The tricky part is wiring it. The plan was to simply interrupt the key wire going to the switch, and running it through the foot switch. But when you take the dash switch out, there’s a LOT of wires running to it….. Blacks (ground) pinks, and a red and white…. Well, via DTNA Connect I was able to access the schematic:

There’s two little lightbulbs, ie the dash lighting and the “on” light, and the only remaining connection is thus the on/off signal: the red and white. See, you aren’t actually turning on or off the brake, you are sending a 12V signal to the computer. The rest of the business happens behind the scene. So, here’s the switch in situ:

It works well, really well….. Turn the dash switch “on” as the master, and then just play the left foot.

Edit: After using this for may thousands of miles, something dawned on me. In the original configuration when the cruise control is engaged it will automatically apply engine brake on the down hill if the speed exceeds the set speed by more than 5mph if the main switch is on. (Number from observation). Now with the foot switch in there, the signal is interrupted and it doesn’t. So, for this to work you have to plant your foot on the switch when the speed starts going up and…..nothing happens. Until you’re over by 5mph or more and THEN you’ll see the brake come on….. Once the excess is below 5mph it will come off, and you can remove your foot……

IGNITION LOCKOUT OVERRIDE. WARNING….. this is the intentional bypass of a factory installed safety feature. Disable at your own risk! But, it’s darn handy to be able to go “Ah crap” when you’re about to hit the road and you discover you forgot the awning over the front door, and you can flip a switch and retract it without having to shut down the engine. So, things that will work when the engine is running and this override is engaged: Slides, awnings and the front sun shade will come down beyond it’s normal stopping point when driving to give you that extra inch. It is possible, and probable, that the front TV will work too. Haven’t tried it and I know that it would be a violation of PA law, and probably several other states, to have it on while driving. (Plus, I’ve disabled the front TV inhibition…. see here.) How does it work? There’s a relay in the power supply for these things. Power off state is “on”. Once the ignition turns on the relay is powered and switches to “off”. So….. how to bypass? Easy. Go into the forward electrical bay and find the 12V fuse for the “Ignition Override” On the back of it splice a wire into the wire coming out of it (or the one in, don’t think it matters,) and run it up into the cockpit to a guarded switch. Flip the switch and no power will reach the relay and it stays in the “on” position. Done. 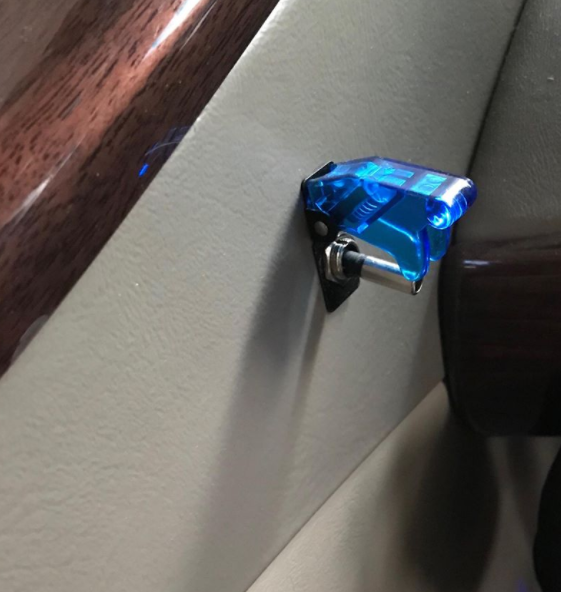